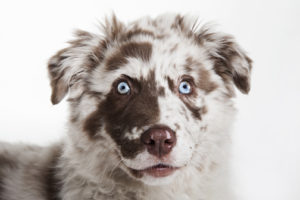 Dogs, it is safe to say, see the world in an entirely different fashion than we humans do. I’ve been amazed by my dog Layla’s ability to catch movement at dusk from yards away, and I also have watched incredulously as Layla walked right by wild rabbits who have frozen in their tracks in broad daylight. As a human, I rely on my sight to determine my world. Layla, like all dogs, depends heavily on her sense of smell, and sight comes in a close second.

Here are a few main differences between human & dogs vision: 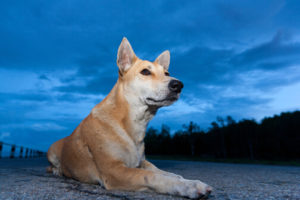 Dogs, especially those bred for hunting, are crepuscular, which is a fancy term for saying they are more active in the early morning and evening hours and tend to be sleepier the rest of the time. Dogs evolved this way to keep up with their prey, such as rabbits, deer, squirrels, and birds, which are also much more active at sunrise and sunset.

As such, dogs see approximately five times better in the dimness of twilight than we do. In the dark, human eyes can take up to 30 minutes to adjust. Dogs’ eyes can adjust almost immediately. Dogs can do this because their eyes have more rods, which are vision receptor cells that detect light and dark than humans have.

This trait also gives dogs the superior ability to detect motion and shapes. Dogs recognize people and other animals through body movement and physical gestures. An object at rest, such as a rabbit, when it freezes, is much harder for a dog to recognize, which is why Layla sometimes misses seeing them.

Dogs’ eyes process moves so fast that they can see the flicker of a picture refreshing on television. TV programs designed especially for dogs, such as DogTV, are created with more frames per second in order to keep them interested!

Canines have larger pupils than humans, which lets in more light. In addition, they also have a reflective surface behind their retinas called the tapetum lucidum, which gives the retinas a second chance to collect light. The tapetum is also responsible for a dog’s eyes appearing to glow in the dark, called eyeshine. The light in a dog’s eyes will typically reflect a green or blue eyeshine, depending on the light angles and mineral makeup of the tapetum. Although human eyes do not have eyeshine in darkness like dogs do, a flash photograph can cause a red-eye appearance because the flash illuminates the blood supply of connective tissue in the back of the eye. 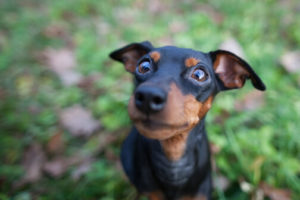 Dogs have a wider range of vision because their eyes are on the sides of their head. Dogs can see peripherally about 250 degrees, whereas humans can see only 190 degrees in their visual field.

Because dogs’ eyes are farther apart, the visual field of each eye does not overlap as much as human eyes do. This overlap is called the binocular field of vision, and it gives humans the superior edge in being able to focus clearly on details and judge distance. Most dogs have 20:75 visual acuity compared to a human’s 20:20. So, what a human can see clearly at 75 feet, a dog can only see clearly at 20 feet. This means dogs mostly see fuzzy silhouettes at a distance, as details get lost and tend to blend together. 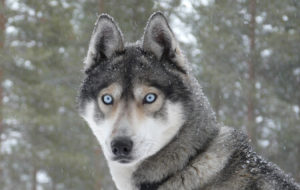 Compared to humans, dogs see less color and color intensity. Although not totally colorblind, dogs have only two kinds of color receptors to our three, similar to a human with red-green colorblindness. Dogs see red and green as shades of grey. However, blue and yellow stand out to them. Therefore, an orange ball lying on green grass could be very difficult to see for most dogs, whereas a human would be able to see the ball very easily.

Both the lack of ability to see color variation and the inability to differentiate details can cause anxiety in some dogs when introduced to someone or something new in their environment. Animal behaviorist and trainer, Patricia McConnell says dogs do not understand the concept of “removable parts.” Instead, dogs tend to see the outline of the whole. So, hats, backpacks, bicycles, boxes, heavy coats, and even sun glare may all change the silhouette of a recognizable human being into something different. For example, when Layla was young, she used to bark at a neighborhood boy who would fly by on his skateboard. Instead of seeing 12-year-old Nathan riding on his skateboard, Layla likely saw them as attached, some sort of human-like monster with noisy wheels for feet. Once she was comfortable enough to sniff Nathan and then the offending skateboard that Nathan used, all was well.

A dog’s sense of smell

A dog’s sense of hearing