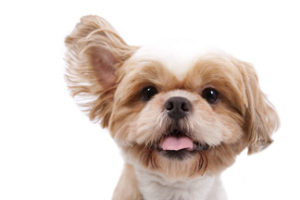 Ever notice that your dog can hear company coming before you do? I always know when to expect a friend, because my dog, Layla, will go to the front door and sit there expectantly. Several minutes go by, and, sure enough, the doorbell rings. A dog’s hearing enables it to detect sounds up to 4 times farther than we can, and by some accounts, their hearing is about 20 times more sensitive. Layla was likely able to hear my friend coming by the familiar sound of her car motor, even before she entered my neighborhood.

Human hearing vs. a dog’s hearing:

Dogs ears are well developed for sound. Puppies are functionally deaf at birth, but their ear canals begin to open at two weeks. Unlike humans, who have only 6 muscles in their ears, dogs have a whopping 18 ear muscles. These ear muscles are used to raise and tilt their ears to better catch sound waves. In addition, dog can rotate each ear independently, to better notice which direction sounds are coming from. Dogs with upright ears, such as German Shepherds, have the best hearing in the dog world, as their large ears amplify sound. However, hunting dogs, bred for scent detection, such as the floppy-eared Blood Hound, don’t hear as well. Their floppy ears help fan scents into their nose.

Sound (or a sound wave) is measured by two main characteristics: frequency and loudness. Frequency is measured by Hertz (Hz), or cycles per second. Frequency determines the pitch of a sound. For example, bass drums have a low frequency, or low pitch. A flute or whistle would have high frequency, or high pitch. Loudness could be described as volume, or the intensity of the sound pressure, and is measured in decibels (dB). For example, the sound of rustling leaves would be measured at 20 dB, and the immense noise at a rock concert could escalate up to 130 dB. Interestingly, a loud, large barking dog can reach 80-90 decibels.

Because dogs have such a high range, noise trauma is a potential concern for them. Repeated exposure to noise at 85 dB can create hearing loss in both humans and dogs. The tiny, hair-like sensory cells, called cilia, deep in the ear are very easily damaged by sound pressure and do not have the ability to regenerate. For this reason, some dog guardians will put specialized ear muffs on dogs that may be exposed long-term to harmful noises such as guns or fireworks.

Here are some examples of sounds in decibels:

Dogs need good nutritional support to maintain healthy hearing. A diet that includes powerful antioxidants, minerals and vitamins helps to support a dog’s immune system. In turn, a strong immune system will fight off bacteria, yeast and infections that would want to invade a dog’s ears.

For more on Cool Canine Capabilities…

A Dog’s Sense of Smell