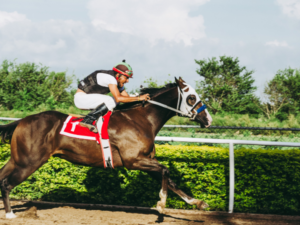 Longshot Rich Strike won the 2022 Kentucky Derby having crossed the finish line of the 1.25-mile track with a time of 2:02.61.  Only two horses have ever finished under the two-minute mark:  2001’s Monarchos and the 1973 record-setter Secretariat.  Secretariat (record holder for all three Triple Crown races), Monarchos, and Rich Strike are all of the same breed:  Thoroughbred.

It is the fastest breed of horse in flat racing competitions measuring distances of half a mile to 10 miles.  These horses are of proven racing stock and their pedigrees have been completely documented.  They measure 15 to 17 hands and have dignified heads and deep chests.  Their colors are typically black, gray, bay and chestnut.

Cheetahs are the fastest animal on the planet, clocking in at about 65 miles per hour!  The top speed for a horse is about 43 miles per hour.  In a sprint, the cheetah is sure to win, but its body cannot maintain that speed over a long distance.  The horse has an amazing mechanic and metabolic system.  It runs with high efficiency.  In a sprint, the Quarter horse is faster than a Thoroughbred, but that breed is still nowhere near being as fast as a cheetah.

Related Article: My Horse Has One Horsepower, Right?

Another fast breed is the Standardbred. This breed is ideal for harness racing, a competition in which the horse is harnessed to a light sulky. This sport is an American tradition and even a main event at state fairs. It was at the 1993 Illinois State Fair when Cambest set the record for speed within his breed. During the time trial, he completed the mile in 1:46.10. No Standardbred has beaten his time yet.

Standardbreds usually participate in races that are a distance of one mile.  Competing in the half-mile harness races are the American breed called Trottingbred Pony.  Raced in rural areas mainly in Indiana and Florida, the Trottingbred Pony covers the distance in about a minute.  For race eligibility, their withers usually measure no more than 51 inches in height.  This is commonly a children’s sport.

Racing wasn’t the first purpose for the ancient hot-blooded breed called the Arabian.  They were developed by the Bedouin people living in the desert regions of Turkmen and Caspian.  Originally a warhorse, the Arabian stands 14 to 15 hands and has a short back and long, arched neck.  Viewing its profile, there is a noticeable dip in its head.

Their skin is black, and their hair is a solid color.  This breed was used by the English when they were developing the Thoroughbred.  Arabians today compete in endurance races, many of which exceed 100 miles and some of which last for two hundred!  These races often last longer than a day!  While the competitors display bursts of speed at times, horses tend to trot along at about 7 miles per hour.

The Barb is another breed that has helped the Thoroughbred become what it is today.  Originally from the Barbary Coast of Africa, this ancient hot-blood measures 14 to 15 hands.  It has powerful front quarters, contributing to its speed and agility.  The Barb is a hardy horse with a straight, convex head.  It is a fearless breed that was used in war.  Its ability to make quick maneuvers in response to the slightest movement of the reins made it an ideal fighting companion.  Whether on the track or on the battlefield, the speed of a horse is astonishing!