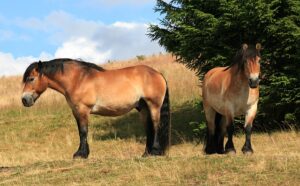 Horsepower and The Industrial Revolution

In the late 18th century, steam power helped usher in what would be called the Industrial Revolution, a time in Britain when machinery began to aid humanity in countless aspects of daily life. “Living” power was beginning to be replaced. Up to this point, for work to be done, people relied heavily on their own laborious efforts and that of their working animals. Throughout the preceding centuries, man used the horse to accomplish a plethora of tasks. The horse served in agriculture and in mining operations. It hauled water for firemen and rushed the injured to hospitals. It transported artillery across battlefields. It carried and hauled passengers on short trips and long journeys. Horsepower was dependable and few were willing to begin putting their trust into machinery.

What we know today as horsepower was a new concept in the late 1700s. It began as a kind of marketing campaign to influence consumers who were using horses for agricultural work and in the mining industry. The people had to be convinced that steam engines were a good investment. They saw the challenges produced by horses, especially in booming cities like London and later New York. Municipalities struggled to feed and shelter the horse population, not to mention removing their waste and keeping contagion and swarms of horseflies at bay. Everyone caring for a horse knows the benefits and detriments one will face. It needed to be proven to people that a single machine could replace a team of horses.

James Watt, an accomplished Scottish engineer, had improved the steam engine by adding a separate condenser that made it run faster and consume less fuel. This improvement had the potential to revolutionize how farmers and miners did their jobs. Consumers, however, had difficulty grasping the concept of how one machine’s power compared to another. Just how many of their horses would be spared from labor if a steam engine were procured? This was the problem that sent Watt to London breweries to search for an answer. There, he observed draft horses and began to take measurements of their working bodies and the tasks they were accomplishing. Consumers needed an analogy to grasp the potential power of a machine. Watt gave them horsepower, the power required to move 33,000 pounds the distance of a single foot in one minute.

Almost immediately, the scientific world criticized the idea of horsepower. They called it an “unscientific unit”; Watt indeed played with the results he had calculated in his study by multiplying his result by 1.5 to make the product seem more impressive. Still, “horsepower” hit its target consumers. Now they could see one machine with 10 horsepower was similar to a team of 15 draft horses. Draft horses are known for their ability to work hard. They have stamina and strength. It is not uncommon for one to be able to pull up to three times its own weight. Breeds like the Belgian, Dutch Draft, Ardennes, Shire, and Percheron are known for the work they can do. Ranging from 1,500 to 2,600 pounds and towering heights from 15 to 19 hands, draft horses are massive. Imagine a team of 15 ploughing a field or hauling a cannon up rugged terrain! That is a lot of animals required to do one task.

In the present, we have a difficult time estimating how many horses would be required for a job. As late as the early 1900s, it was not a surprise to see a team of 40 draft horses pulling a single piece of farm equipment. While that seems like a lot of horses to us today, that equates to just under 27 horsepower. Modern automobile enthusiasts may laugh at that. We now build high-performance muscle cars for the average driver that are up to 500 horsepower. That would be more than 300 horses! Most people would probably opt for parking their Mustang in the garage instead of stabling a team of that size!