Horse owners know their barns are filled with unique temperaments, but does science know if these horse personalities are heritable?

Researchers are continuously uncovering which horse genes are responsible for certain equine personality traits and characteristics.

According to The Horse, “Many characteristics, such as coat color, height, athletic ability, and behavioral tendencies are genetic in nature.” She says, “Researchers are using ‘genomics,’ the study of gene heritability, structure, and function, to determine which characteristics are connected to which genes.”

studied personality trends within certain breed categories, and are beginning to find evidence to suggest this.They have been investigating the Franches-Montagnes horse— a draft mix, developed from Warmbloods in Switzerland. The Franches-Montagnes horse has personality traits that fall between those of Warmbloods and heavy drafts. This breed provides a strong basis for studying genetic trends in horses, especially in context to personality traits. This is because they show to be very different from both the draft and the Warmblood. And, the researchers said, “the more Warmblood genes one of these horses has, the more ‘Warmblood personality’ it has.” 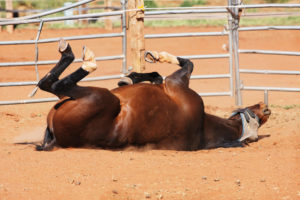 The French National Agricultural Research Institute teamed up with the Agroscope researchers to test 184 of these horses. The horses ranged from 3 to 23-years-old and came from a variety of bloodlines. The researchers housed them in 18 different stables.

The researchers used the Lansade Temperament Test for their personality-information findings. They used a piece of string laid against the withers for the tactile stimulation test, and an opening umbrella for the fearfulness test. After comparing the results to the Warmblood and the heavy draft horse data, they concluded that overall, “Franches-Montagnes horses had a medium tactile sensitivity level that fell between that of drafts (low sensitivity) and sport horses (high sensitivity). The Franches-Montagnes breed had significantly higher fearfulness levels than did draft horses. While their fearfulness did not differ much from that of the sport horses, the more “Warmblood” the horse’s mix was, the more fearful he tended to be,” Ruet said While environmental variables do contribute to forming a horse’s temperament, this study suggests that nature is the backbone of a horse’s personality. Brooks Equine Genetics Lab studied the biological truth behind the stereotypes of chestnut horses being “excitable and reactive.” Chestnut horses might be “genetically wired to be more sensitive to environmental stimuli.” Ann Staiger, a recent graduate of Brooks’ team, is conducting an ongoing experiment with Tennessee Walking Horses to “map the genetics responsible for tractability and for willingness to load on a trailer.” Along similar lines, University of Florida researchers at Brooks Equine Genetics Lab recently studied Quarter Horse weanlings to “map the genes for spooking behavior.” 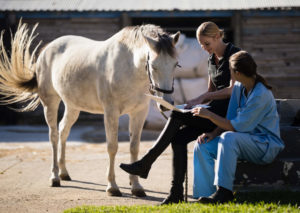 Brooks points to pinto horses as an example. Their tobiano color comes from “asequence change” which causes their white hair on a base coat color.

Studying a horse’s personality type can be helpful for building a tailored training program. “In this study, we found differences between breeds based on two studied personality dimensions,” said Ruet. “These results are promising for the research into genes influencing horse personality.”