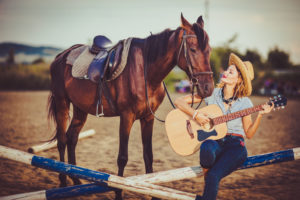 Studies have found that relaxing music can help ease a horse’s agitation levels, especially during travel or when their amount of stall confinement needs to be increased. Learn how the right type (and volume) of music for horses can be a useful tool in helping with stressors, like vet visits, trailering, or pre-performance jitters.

The worry of barn beats 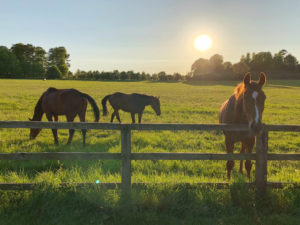 For opponents of music for horses, the worry is that playing background tunes will block out natural environmental sounds that a horse uses for situational awareness. However, many equestrians have found success in calming their horses with music. Many researchers have dedicated their studies to exploring the music-therapy controversy, finding that the positives outweighs the worry. Although you could use the sort of New Age music you’ll find in any spa, researchers have dug into finding which genres specifically help ease your four-legged friend. 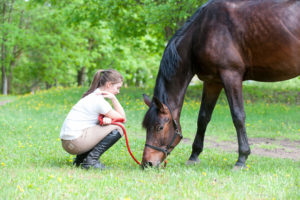 Researchers in Poland explored music’s effect on fear, aggression, and overall stress. They subjected a group of 3-year-old Arabian horses to specifically composed music for five hours a day, for three months. The research showed a positive effect on their emotional state, as well as their performance.The horses’emotional states were assessed by measuring their heart rates at rest, saddling, and warm-up walking intervals. They also recorded racing performance and the number of wins for each horse. Comparing this data with a control group of horses, who were exposed to the same activities without having listened to music, showed amazing results. Music’s calming effect, as well as performance-boosting effect, was visible for each activity — even during the excitement of being ridden at a gallop.

What type of music for horses and when?

Experts at the French National Stud found that playing excerpts of classical-style film music to horses, such as passages of the theme from Forrest Gump, by Alan Silvestri, would significantly reduce their anxiety. Other scientists have revealed the dramatic calming effect of Mozart on their horses. 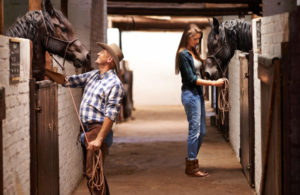 Researchers have also examined the effects of music strictly on stabled horses. Claire Carter and Linda Greening of Hartpury College in Gloucester, England, studied eight stabled horses. They exposed eight Thoroughbred geldings to 30 minutes of four different kinds of music, as well as 30 minutes without music. Interested in the effect of different types of music, the researchers played: Beethoven, Hank Williams Jr., Green Day, and New Stories. These choices explored the effects of classical, country, rock, and jazz. They recorded 120 behavior observations per horse, per genre. An equine ethogram (a catalogue of all behaviors or actions exhibited by horses) outlined the behaviors. The researchers found that horses showed the same balance of restful and alert behaviors when listening to classical and country, as they did without music. However, with classical and country music, horses tended to eat more quietly than they did with silence. Carter and Greening explain that this behavior reflects calmness and good welfare. 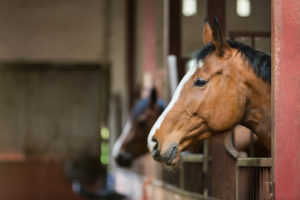 When jazz and rock music played, the horses displayed more frequent stressful behaviors, such as head tossing, stamping, and snorting. When they ate while listening to these two genres, they “snatched at food in short bursts” indicating nervous behavior. Carter offered that the fast tempo and minor key could cause the signs of distress.

“The behaviors that horses showed while listening to classical and country music,” Carter said, “suggested that the music had an enriching effect on the environment of the stabled horse.”

Equine Wellness Magazine offers a few hints on using music for horses to help them relax in the barn. They highlight the importance of being mindful of the wider range of hearing horses have over humans, warning that a decibel that is comfortable for you, might be extremely loud for them. They tip to also be aware of a radio with a dial. Your horse is sensitive to the static that gets picked up when the tuner isn’t directly on the station. Carter and Greening recommend playing music at a volume of 21 decibels when in the barn. 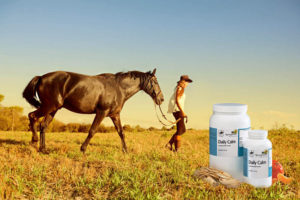 To optimize the soothing power of music for horses, add natural supplements to support non-sedating stress management. Many horse owners have found that the right supplement can help horses manage nervousness and stress while supporting concentration and focus, and it can really help competition, stall walkers, weavers, and easily “spooked” high-strung types.