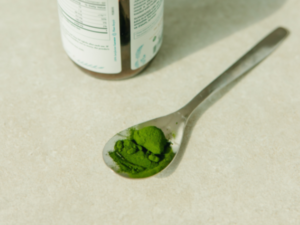 When you read about superfoods, you’ll see some consistent food items on nearly every list, such as kale, eggs, blueberries, and salmon. There’s another superfood, however, that you don’t always see on popular lists. It’s called “spirulina” and it can also be a fantastic supplement for your horse.

In this post, we will look at what makes spirulina a superfood, the overall benefits it can provide for your horse(s), possible side effects, and its often-misunderstood relationship to kelp.

Overall Benefits of Spirulina for Horses

Spirulina is a blue-green algae found in both fresh water and saltwater. The fresh water variety is the one more commonly used in supplements. From a nutritional standpoint, it is often given as a protein supplement, as its nutritional profile is 55-60% protein. In addition, Spirulina’s amino acid profile is ideal for aiding in proper organ and muscle function.

Another benefit of Spirulina is its ability to help support a body’s healthy response to respiratory inflammation and its immune system support with regards to antihistamine reactions that can help reduce the severity of allergic reactions.

Heaves is a respiratory condition characterized by an allergic reaction that causes lung tissue and bronchial passages to narrow. The condition is chronic, but non-infectious. You may have also heard the condition referred to as Recurrent Airway Obstruction (ROA). In the past, it has also been known as Chronic Obstructive Pulmonary Disease (COPD), which is also common in humans.

Symptoms of Heaves usually start with a cough. As it progresses, you may also notice an increased heart rate, wheezing, and nostril flaring. Heaves is much more common in horses that are six years old or older.

While there is no known cure for Heaves, the first suggestion for easing symptoms of Heaves is removing the allergens that are causing problems. Hay is usually the number one culprit, particularly round bale hay. Straw commonly used for bedding is also a common allergen.

Adding Spirulina to your horse’s dietary routine can help support normal respiratory functioning and immune system responses, which are involved in allergic reactions that characterize Heaves.

Equine Metabolic Syndrome (EMS) is characterized by insulin dysregulation, which can lead to, among other things, Laminitis, a hoof disease that can cripple horses.

Recent research studies have uncovered a link between EMS and intestinal inflammation. Because Spirulina is a natural substance known to help support anti-inflammatory responses, it was tested in a controlled environment to see if it had any effect on horses with EMS.

Spirulina extract was given to effected horses, in vivo, and responses were measured. The results showed that horses that received Spirulina lost weight and displayed improvement with regards to insulin sensitivity.

Possible Side Effects of Spirulina for Horses

Spirulina offers no known toxic side effects when taken at recommended doses and has even been tested at doses many times the normal recommended dose with no side effects. As with any supplement, however, you’ll want to follow dosage recommendations. Pay attention to any possible changes in your horse after starting Spirulina as a dietary supplement.

Spirulina and Kelp are often mentioned in the same conversation. If you are reading this post, it might be because you are wondering if there are any differences between the two and, if so, what they may be.

First, they are both algae. As mentioned above, Spirulina is a blue-green algae that grows in fresh water and saltwater. Kelp, on the other hand is a brown algae that grows in saltwater environments. While we have already discussed some of the characteristics of Spirulina, one major difference from Spirulina is that kelp is particularly rich in iodine. As such, it is commonly used as a supplement for horses with thyroid issues stemming from low levels of iodine. Too much kelp, however, can lead to excessive levels of iodine, which can present its own issues, including thyroid inflammation, nausea, vomiting, and diarrhea.

In recent years, Spirulina has been hailed as the secret superfood that can improve overall quality of life in humans and horses alike. Because of its ability to support normal anti-inflammatory and allergen responses, it’s easy to see why.

At Springtime, we offer Spirulina for horses in a convenient wafer form to help reduce the mess that can come from powders and ensure that your horse is getting the full dosage each time.