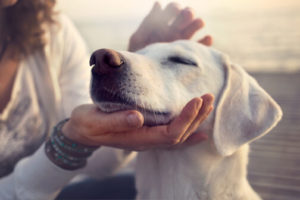 Dogs are born blind and deaf, so they rely heavily on their sense of touch. At birth, puppies are licked clean from head to toe by their mothers. This helps to stimulate the pups to breathe on their own. In addition, momma dogs will continue to lick their pups to encourage elimination and healthy circulation. Puppies, in turn, use their sense of touch to find the warmth of their mother, where they can root for milk and nestle for comfort and warmth.

It is extremely important that puppies become sensitized to human touch early in their development. The human/canine connection has been firmly in place for thousands of years, but, just like human babies, puppies need contact to properly bond with people. Without this, many dogs grow up to be anxious, aggressive, and challenging to work with. Gently loving and handling a puppy not only helps with socialization, but makes grooming and health examinations much easier when they are adults. Plus, petting can be very pleasurable for dogs, as it produces oxytocin (the bonding and affection hormone), just as it does with people. 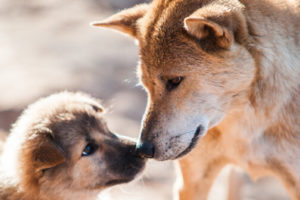 Momma dogs greet their pups nose to nose, gently nuzzling before moving on to sniff their bodies. Adult dogs are more cautious in using their nose when greeting each other, and generally save this type of greeting for dogs they trust. This would also include puppies that were not their own, human babies, horses, cats, and other small animals. Among dogs, it has been suggested that the nose-to-nose greeting is a way of passing along information, such as the presence of food. A dog can smell food on another dog’s breath, which helps them to figure out that there may be available food nearby.

Some dog trainers suggest that human guardians gently greet their young puppies with nose-to-nose contact as part of the puppies’ socialization training. They feel it may stop nipping and encourage puppies not to be fearful of eye-to-eye contact from people. 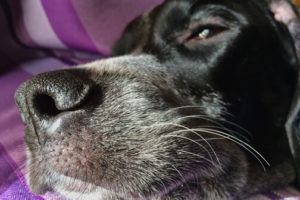 A dog’s muzzle, jaw, and forehead are covered with coarse, specialized hairs, called vibrissae or whiskers. These are very sensitive, and the minute vibrations they pick up give information on the surrounding environment, including approaching danger. For example, whisker hairs just above the eyes protect the dogs eyes by triggering a reflective blink. This sensitivity is why some dogs shy away from being petted on the head. The whiskers below the chin and on both sides of the muzzle help give spatial awareness, enabling the dog to approach an object cautiously. Trimming whiskers is not recommended, as it may take the dog some time to reorient their navigation. 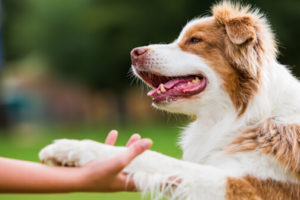 Many dogs don’t like their paws being touched, and this could be for a few different reasons. Firstly, dogs rely on their paws for survival. A dog with an injured paw in the wild has a reduced chance of a successful hunt, or being able to defend itself. Secondly, there are plenty of nerve endings in the paw pad, making the paws very sensitive. This sensitivity helps dogs identify and negotiate different types of terrain. Finally, it could come down to dominance. Dogs are very touchy-feely around each other, but you won’t see them go near each other’s paws.

It’s important for every new puppy parent to help get a dog used to having their paws touched. Pups that are confident enough to have their paws handled will have an easier time with nail trimming and grooming. In addition, should a paw become potentially injured, pet parents will have a much easier time examining their dog if they are less sensitive about having their paws handled. When introducing this hand/paw desensitization process, trainers suggest starting by gently rubbing each leg down to the paw, and slowly moving into massaging the paw after resistance has faded. Patience and treats can help, especially for an older dog.

To summarize, a loving touch is essential, both for the health of the dog and the bond between pet parent and pup.