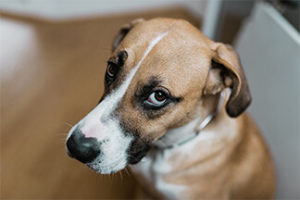 Whether you call it “puppy dog face,” “puppy face,” or “puppy dog eyes,” we all know the look. When a dog has his head down while his eyebrows and big sad eyes look upward, it suddenly becomes awfully hard to stay angry. Kids and adults mimic this face when a little extra cuteness is needed, and new research shows that dogs are doing it on purpose.

While they only make this face when we are looking, researchers say it is for the benefit of bonding more than to get a little piece of your dinner. Bryan Hare, cognitive neuroscientist and co-director of the Canine Cognition Center at Duke University in North Carolina, says, “Dogs make their eyes more attractive to us while we are watching, not just when we are in the vicinity or in response to food.”

It was believed that a dog’s facial expression was an involuntary demonstration of how the dog was feeling; however, this is not the case. The expressions that our dogs produce are more of a means of communication with humans than a visceral reaction to a stimulating situation. For instance, dog cognition expert, Dr. Juliane Kaminski, and her research team at England’s University of Portsmouth found that the dogs don’t move their faces in response to treats, but will do so only as a response to human attention.

They studied 24 dogs of different breeds and filmed the dogs’ faces throughout a range of exchanges. These situations included positioning a person toward the dog, as well as having them turn their bodies away, simulating a distracted owner. An anatomically-based coding system, called DogFacs, measured the facial expressions. Facs systems produce a standardized measurement of facial changes, based on the underlying muscle movement. They were originally made for human facial expressions, but have been reformed for use with other animals. Although the dogs’ ages varied from 1 to 12, the “puppy dog face” was consistently used among the study dogs, so the behavior is not exclusively a puppy thing.

Dr. Kaminski noted that this behavior was consistent with two previous studies of theirs that focused on human/dog eye contact: 1) where they found that dogs stole food more often when the human wasn’t looking; and 2) where they concluded that dogs follow the gaze of a human if the human first establishes eye contact with the dog. “We knew domestic dogs paid attention to how attentive a human is,” she says. “The findings support that dogs are sensitive to humans’ attention and that expressions are potentially active attempts to communicate, not simple emotional displays.”

Gregory Berns, a neuroscientist at Emory University in Atlanta, Georgia, uses brain scans to explore dog behaviors. “It would be interesting to determine whether dogs modulate these expressions based on the identity of the person,” he says. “My impression is that dogs frequently attempt to communicate with us, but we are not very good at recognizing the signs.”

Why Do We Fall For Puppy Dog Face? 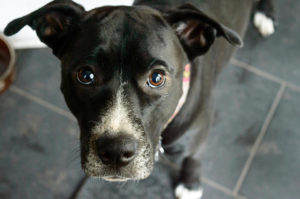 For humans, “puppy dog face” closely resembles sadness, which could be why humans are more empathetic to the face. Another point Kaminski makes is that the appearance of larger eyes are infant-like, which triggers protective rather than aggressive behavior on our part. Regardless, humans are particularly responsive to that expression in dogs.

Talking and touching, along with a physical response in the owner, is an incredible reward for a gazing dog. A dog’s oxytocin levels are increased when they are receiving a long gaze from their owner. This hormone is associated with connection and attachment, and serves as the feel-good feedback that boosts bonding. Japanese researches found that after receiving those gazes, the owners’ oxytocin increased, too. They suggest that dogs become domesticated in part, by adapting to the method of communication that they can understand: eye contact. “Dogs have a unique history. They have lived alongside humans for 30,000 years, and during that time selection, pressures seem to have acted on dogs’ ability to communicate with us,” noted Dr. Kaminski.

Assistant professor of psychology at Yale University, Dr. Steve Chang, studies oxytocin in animals. Dr. Chang notes that through domestication, “dogs came to regard humans as their key social partner, while humans also came to view dogs as social partners.” Chang believes that dogs cleverly, while unknowingly, utilize a natural system that is meant for parent-and-child bonding, thus, the “puppy dog face.”

Evan L. MacLean, co-director of the Duke Canine Cognition Center, said: “Maybe dogs gaze at you because it feels good. Maybe they are hugging you with their eyes?” 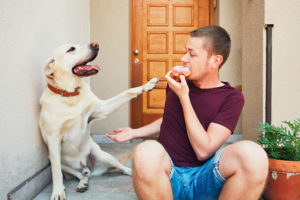 The evolutionary anthropologist notes that fundamentally, for domesticated dogs, “human behavior is the telltale of everything that is about to happen.”

Through staring, our four-legged friends tune into us and our strange human behaviors. So, let them ogle. With wide puppy dog eyes and all.