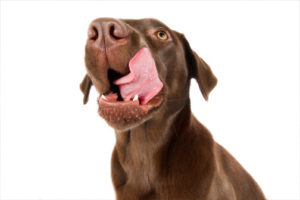 A dog’s sense of taste can be a bit confusing to us humans. We perfectly understand our dogs wanting leftovers from our fried chicken dinner, but munching on rotten leftovers spilled from an outdoor garbage can, not so much. In fact, I caught my dog Layla attempting this very thing on our morning walk as I turned to wave to a neighbor. Disgusting!

Interestingly, smell is more of a driving force than taste in determining a palatable food item for dogs. Mother Nature was a little chintzy when gracing dogs with taste buds, giving them only about 1,700 compared to a human’s 9,000. However, she more than made up for it with their sense of smell, which is at least 10,000 times more powerful than a human’s. Scent and taste form a sensory duo, which is perfect for aiding a dog find food sources in nature. 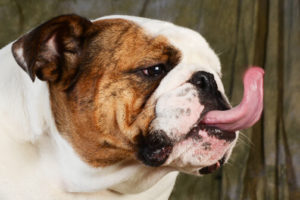 Taste is one of the first senses that puppies are born with, although a dog’s sense of taste may take a few weeks to mature. This ensures a healthy desire for mother’s milk, so the puppies can thrive. Because puppies are blind at birth, the smell of the milk guides them to their mother’s teat, and the pleasurable taste of milk helps ensure their happy return.

Like humans, dogs have the four main taste receptors that humans do: salty, sweet, sour, and bitter. Some scientists believe dogs also have taste receptors for umami (savory) and fat, which would be associated with consumption of meat. Their taste buds are primed for amino acids, the building blocks of protein, because meat is their first food of choice.

Precisely because of dogs’ desire for meat, dogs’ taste buds are also attuned for water. The salt in meat activates the taste receptors for water and drives dogs to find some. This ensures balanced internal fluids. Humans do not have this, and don’t quite get the same push for hydration (hence, we humans may misread the body’s request for water and decide that munching on Cheetos will do the trick). 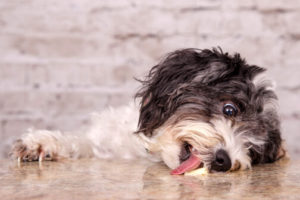 Taste helps protect both humans and dogs from eating indigestible or dangerous items (sour, bitter). Taste also encourages the ingestion of nutritious food (salty, sweet). Reactions of pleasure or disgust are common to both humans and dogs, but we may differ slightly on what we would view as enticing. For example, the cadaverine and putrescine compounds found in a decaying animal corpse can drive dogs wild; us, not so much. Less-than-fresh meat smells good to a dog because it’s edible to a dog, and it smells terrible to people because it can make us very sick.

Dog food makers pay big money for manufactured flavor coatings called palatants. Heavy on smell (smell is more than 75% of a flavor), they know that if they can get a dog interested enough to go to the bowl, they will probably eat. These palatants are mixed into kibble and canned dog food to improve the aroma to entice eating. Basically, if a dog’s nose deems the food worthy, down it goes, whether it is good for them or not.

Older dogs, like humans, can lose both taste and smell as they age. There are many different physical reasons why this can happen. Loss of taste and smell means loss of pleasure in eating, and this can be serious. Again, strong, new, and even strange-smelling enticements (such as tripe) may encourage eating, and may give the senior dog a little more happiness while doing so.