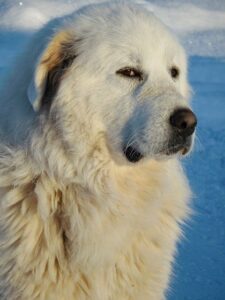 Are you looking for a canine companion that loves winter weather as much as you do? Several dog breeds have coats that can withstand the snow and cold temperatures normal to the northern hemisphere throughout the winter months. Here’s a look at a few of the best breeds suited for these conditions.

Several breeds fit for cold weather belong to the Working Group of canines. Among them are two with a history of sled pulling for the indigenous peoples who had inhabited the harsh winter environments of Asia and North America. Bred to run, the Siberian Husky is the ideal puller for light loads. Fast on their feet, Huskies are champions at cold weather competitions like the Iditarod—a sled race that covers hundreds of miles. Besides being tough sporting contenders, Huskies have a work history that includes sled pulling during the Gold Rush and serving on search and rescue teams in the United States Army during WWII. The double coat of a Siberian Husky has a dense, soft undercoat that insulates the body in Arctic-like temperatures. Thick fur provides more insulation between its toes and pads. All that hair requires brushing twice a week and daily when shedding (as is normal for breeds that love cold weather). Siberian Huskies aren’t the easiest to train, and they need a large area for running or an owner who likes to jog. These playful dogs are adventurous and clever, stubborn and mischievous. They are alert, but do not count on them for protection; they are too friendly with strangers!

Siberian Huskies are large dogs. Males tend to weigh between 45 to 60 pounds with a usual height surpassing 20 inches. An even larger sled dog is the 75- to 85-pound Alaskan Malamute that stands around 25 inches. Being larger and stronger than the Siberian Husky, the Malamute can pull heavy loads for a long haul. They were traditionally used by seal and polar bear hunters along the northwest coast of Alaska. The Alaskan Malamute loves being with its family. Malamutes need to run or they will give in to roaming. They can be destructive indoors, and they love to dig outdoors. This is also a vocal breed that howls.

Like the Malamute, the Akita is a large and powerful breed with heavy bones. Originally from Japan, Akitas have a straight, harsh outer coat and a dense undercoat that makes the breed suitable big-game hunting companions in snowy, rugged conditions. Akitas are devoted to their families. They love the cold, but are happier inside with their people. Training with daily mental and physical exercise can shape them into well-mannered pets when inside; however, they may not be able to help that they’re messy drinkers. Once used for dog fighting, Akitas now work as guard dogs and police dogs in Japan.

The Great Pyrenees is another working dog that tends to be a bit larger than the Akita and Malamute, and its thick coat makes it appear even larger. An ancient breed, the Great Pyrenees has a penchant for guarding livestock. Named the “Royal Dog of France” in 1675 by King Louis XIV, the majestic Great Pyrenees commonly guarded country chateaus. These dogs love hiking in the snow and are great for families with young children. They are droolers, wanderers, barkers, and sloppy drinkers, but being naturally suspicious of unfamiliar people and animals makes them an ideal watchdog. Like the Akita, this dog will protect its family.

One of the largest breeds in the working class is the Saint Bernard, a calm, gentle canine with a willingness to please. Perhaps it is one of the most recognizable breeds because of its size and history. Since the Middle Ages, it has earned a reputation for excelling in the search and rescue of travelers losing their way in the deep snow between Switzerland and Italy. As residents of the St. Bernard hospice, they had been used to pull carts and turn spits as well as for finding paths in deep snow. Saint Bernards need daily exercise in the form of short runs or moderate walks. Like all large dogs, obesity can lead to hip problems among other ailments. These problems are even prevalent in pups that have been raised indoors.

Retrievers are often a favorite breed for North American dog owners. Of them, the Chesapeake Bay Retriever is one of the hardiest cold-weather lovers in the Sporting Group. Affectionately called “Chessie,” these dogs have a harsh outer coat and an undercoat that’s wooly. The double coat is oily, providing the dog water resistance. For this reason, Chessies should be bathed rarely. Traditionally, Chessies were the ultimate retrievers for duck hunters of Chesapeake Bay’s icy, rough waters. Strong tides, high winds, and sheets of ice mean little to this dog when there is game to retrieve. Plunging into frigid water repeatedly is a favorite pastime of the Chesapeake Bay Retriever; plus, they enjoy retrieving during field hunts, too.

Some small dogs love cold weather also. In the Non-Sporting Group, the standard, miniature, and toy varieties of the American Eskimo Dog has a perfect stand-off double coat for water resistance and insulation. Even its small, thick ears provide protection against sub-zero temperatures. Still, it is not fit for being outside all the time. The American Eskimo Dog, or “Eskie,” has been a popular pet since gaining attention in the circuses of the 1920s. Eskies are bright, easy to train, and lively. They love cold-weather runs and pleasing their owners. While they’re not the best around small children or other animals, they make great watchdogs and faithful companions.

Each of these breeds, as with every type, has unique traits and dispositions that should be researched before committing to ownership. Of these breeds, only the Chesapeake Bay Retriever tolerates warm temperatures well. All of the others may require air conditioning in the summer. Also, be aware that owners still need to monitor breeds suited for cold weather when the temperatures drop. Dogs should be observed for behavioral changes, shivering, and lethargy. Dogs, especially older dogs or those with arthritis or diabetes, may need to be exposed slowly to winter weather. Dogs spending a lot of time in the cold may need more food than usual since they’ll be burning more calories to stay warm. Dog houses should be insulated with straw or hay, not blankets or towels that can freeze if damp. After being outside, dogs need towel drying to help them warm up quickly. Paws should be checked for snow and ice and signs of chapping. Salt and snowmelt solutions should be rinsed from the paws and belly. Ingesting these substances, as well as antifreeze, can make a dog sick or worse. Winter can be challenging for dogs and their owners, but the right breed can make it a lot of fun, too!

« COVID-Induced Separation Anxiety: The Top 5 Ways to Calm Your Anxious Pet
Here is How to Strengthen Your Bond With Your Pet »
Categories
Quicklinks
Recent Posts
See more »
Recent Comments